A Book Review – Survive the Night by Riley Sager 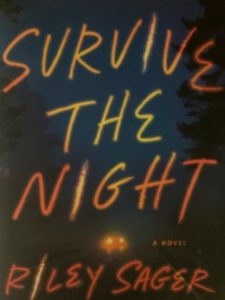 A young coed named Charlie is desperate to get home and flee the campus after her roommate is brutally murdered. She finds a night ride from a total stranger off the campus ride board. Charlie’s reluctant, but the emotional trauma of losing her friend Maddy and the suffocating guilt she feels for abandoning Maddy that night is just too much, and she needs to get out now. Ignore the fact that Maddy is not the first victim and that there is obviously a serial killer on the loose. Catching a ride with a complete stranger, what could possibly go wrong? Well, you guessed it, the title speaks for itself. Survive the Night by Riley Sager took me on a journey of twists and turns that left me, unfortunately, a little car sick.

It’s October and who doesn’t love a good mystery thriller with ladies in distress and human monsters lurking about. I for one love them. But I’m afraid this book just didn’t do it for me. I found myself literally skipping entire paragraphs because I just want to get through it. At times it was too contrived, and others it was so ridiculous it was beyond even attempting to try and believe the story line. I did finish it though. Like I said, ridiculous.

I have stated in the past that I really don’t like writing unfavorable book reviews. I still don’t. I know it’s very personal when someone says something derogatory about your work. I wouldn’t be honest if I didn’t write what I felt about a book. This one just didn’t hit the mark for me. Maybe it will for you. However, you’ve been warned!